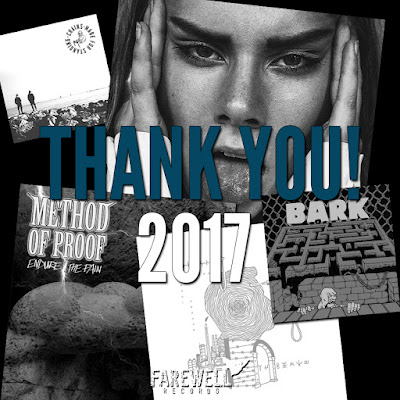 Another year is in the wrap and, once again, it's time to say THANK YOU for your continuous support.

Shout outs to all the bands for their trust, faith and dedicated hard work. You rule!

Beside that we dive quite busi into 2018 with lots of plans and a couple releases in the pipeline and just can't wait for the year to begin.

To all our followers who celebrate this day, we wish you a merry xXx-mas.

For Toni.
We kept silent about this until today since this is that kind of a post I always hoped for I never ever have to write and it's absolutely not easy to find the right words.
On September 30th Toni, singer for Method Of Proof, lost his fight against a serious illness - depression.
It's filling me with sadness that such a young heart had to go out of this world way too early.
In honor of his work and in memory of their friendship the band decided to play a string of memorial shows. Starting with a show in Rosswein, DE @ JH Rosswein March 23rd 2018 along friends in Deluminator, Coldburn, & Belief.

Read Method Of Proofs statement below:

"It's been almost three months since the message reached to us, that Toni isn't with us anymore. Since then, we all tried to get along with the situation more or less in a proper way. On November 29th we all came together to talk about the band's future and what Toni's intention would have been. We agreed that it was always important for him to speak about his illness in an open minded way. First and foremost through is lyrics, but also besides the stage and shows. He always tried give people a good talk about depression, how to get along with it and how to seek help.


For the remaining of us, it was a sure thing to go on and spread his message in the best way we can - to keep his legacy alive. We are going to play a memorial show on march 23rd 2018 at JUHA Rosswein with our dear friends in Deluminator, Coldburn and Belief. As we all agreed that we can't replace Toni's part in the band, we asked three good friends of us who will perform his lyrics that night: Tariq of Deluminator, Robert from the band Giver and Chris our former drummer, who did vocals in Colored Minds a couple of times ago. This will be very special to us and we hope we see a lot of friends that night, to celebrate life the way we believe Toni would have loved.

Besides that we will donate all profits of the show to Freunde fürs Leben e.V. (https://www.frnd.de/) It's an NGO from Berlin with the mission to spread the word about depression and suicidal prevention in a very clear and comprehensible way, especially to young people.

We plan to play a couple more shows with this line up in spring, including the Return to Strength Fest in June.


SAFE STATE
´What's The Need For The Rush?´ LP


VLADA INA
´Chained Down To Things That Are´ LP